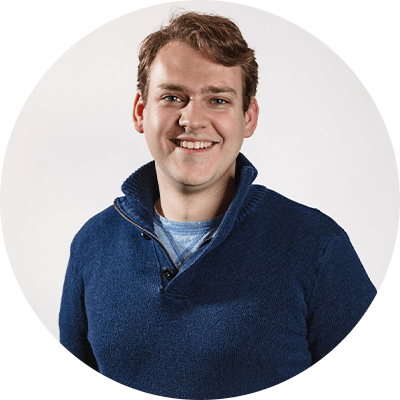 Christian Jessup is a Project Manager on the VisionPoint team, acting as the primary point of contact and advocate for his clients. Christian works closely with strategists and resources across our integrated marketing, web, and creative teams to keep client projects running smoothly, ensuring our work is on target and on time while keeping clients and teammates alike in the know.

Those who watch Christian work might say it’s like watching someone compose a symphony, the way he guides and manages the contributions of various teammates and clients toward beautiful outcomes. That’s not surprising, as Christian actually is a composer.

Christian graduated with a double major in Music Composition and Communication Studies from Gardner-Webb University, where he distinguished himself by winning nearly every sort of academic award possible and packing crowds into film halls to watch re-screenings of movies for which he’s written new original scores, like Star Wars. That project, titled “New Music for a Galaxy Far, Far Away,” won The Edwin W. Gaston National Scholarship for Undergraduate Study, The Alexander Bendazzi National Prize in Art/Music/Dance, and the Alpha Chi Region III Scholarship for Best Paper. In fact, before joining the VisionPoint team, Christian interned with renowned composer Hans Zimmer (“The Lion King,” “Inception”) in Santa Monica, California.

Christian now leads a double-life as a marketing professional by day and film composer by night. He believes that music has a way of conveying messages that words often cannot. As the saying goes, “When words fail, music speaks.” Christian also enjoys watching and analyzing films (just ask him about the Star Wars saga), playing a variety of instruments for bands and worship teams, and volunteering with organizations like Samaritan’s Purse and Operation Christmas Child. When he’s not in Raleigh, he’s probably at Disney World, where he’s been over 25 times already (and has no plans of slowing down in the future).

“It’s kind of fun to do the impossible.”